After Pubali Datta earned both her bachelor’s and master’s degrees in her home country of India, she began working right away with an industry research lab. As time wore on, though, her thoughts turned toward doing something more with growing aspirations in computing.

Datta wanted to home in on a specific research interest, rather than working projects related only to her industry lab’s mission. She also sought to enter academia with a focus on Security and Privacy. Finally, she wanted to further explore what it would be like to teach others with the same interests.

Now in her fourth year, she built a track record of producing meaningful research. Additionally, Datta strives to make a difference for those around her.

That combination earned her a spot in last week’s Rising Stars in EECS 2020 program, as one of four Illinois CS participants. First hosted by MIT in 2013, the purpose of the workshop is to increase the number of women pursuing academic careers in computer science, computer engineering and electrical engineering. This year’s event was hosted online by the University of California Berkeley, after Illinois hosted the 2019 event. 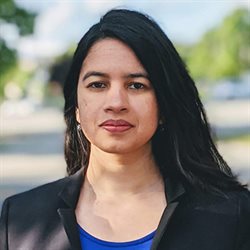 “Being selected for Rising Stars brings a moment of pride but also a sense of responsibility. We realize that although our reasons for choosing this path are rooted in our affinity for research, the impact of our actions goes beyond that. Someone, somewhere may be looking to us, harboring a hope and heaving a sigh of relief, that they too can pursue their dreams successfully even if they are a minority.”
- Shweta Jain, Illinois CS postdoc 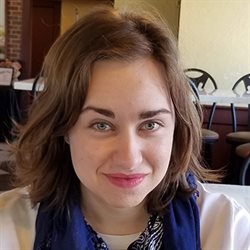 “As a woman in CS, I have always been interested in broadening participation initiatives. Many of us have had experiences that made us question whether we belong in the field—I was the only woman in my undergraduate software engineering course—but taking part in initiatives like (Rising Stars) has been inspiring and reaffirmed that we belong, just as much as anyone else.”
- Emily Hastings, Illinois CS PhD student 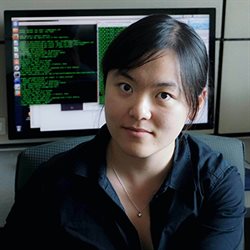 "Participating in Rising Stars gave me an opportunity to showcase my research, my studies and my life at Illinois CS. I’ve studied in the department since 2009, when I was an undergraduate student. Illinois CS provides one of the best learning and research environments nationwide. It is also a welcoming environment for international students, like me, who leave their homes far behind. I was happy to deliver this message to participants coming from many of the world’s top academic institutions.”
- Le Xu, Illinois CS PhD student

“When I first joined Illinois CS in 2017, I found out that my student group included 60 students. Only five were female students, though,” Datta said. “That surprised me a bit, but it wasn’t entirely new to me. In India, I had seen a skewed gender ratio first-hand.

“It’s important to participate in programs and activities like Rising Stars, because it’s great to be alongside all these amazing women dedicated to broadening the CS community.”

Illinois CS was well represented with fellow PhD students Emily M. Hastings and Le Xu joining Datta as participants, along with postdoctoral research associate Shwena Jain. Professor Adam Bates said that he and 27 other Illinois faculty served as mentors in in the program this year, leading all institutions.

“I was extremely impressed by the work of each and every Rising Star I interacted with during the program. This was such a great opportunity to learn so much about cutting-edge research conducted by this new crop of faculty candidates,” Bates said. “And I’ve known that Pubali is a “rising star” for quite some time now, long before the workshop made it official. She is a highly capable and productive researcher of computer systems and security, and she is now one of the world’s experts on the security of ‘serverless’ cloud computing.

“She is very much on track to become a successful tenure track professor at a major research university, making her an excellent representative of the department at Rising Stars ’20.”

This began with Internet of Things (IoT) security, and specifically the apps installed in a smart home. She published her first research paper last year, which came from collaboration between her group and Illinois CS professor Carl Gunter’s research group.

Together, they produced the 2019 paper titled “Charting the Attack Surface of Trigger-Action IoT Platforms.” Their investigation delved into how all the apps in a smart home could lead to a security breach. This contrasts with the use of a single app in isolation, which Datta said doesn’t look all that dangerous.

She has since published three more papers, as her focus has grown.

“After my first research paper, I shifted focus into the back end of the system,” Datta said. “The cloud hosts most of these applications, so we started looking at whether there are any security issues in the cloud that houses the backend of the smart infrastructure and the apps.

“We wanted to find out if there was any potential for a data breach or any other security problems that can lead to authorization issues.”

As with all other Rising Stars participants, Datta presented a poster at this year’s virtual event. She enjoyed learning from all the other participants and found the faculty mentoring sessions to be particularly helpful.

The difference those sessions made, she said, was that she could present the first several minutes of her job talk to receive feedback.

Not only did she leave the event better prepared for her future, but Datta also said she took pride in the leadership role she and all the other female participants are eagerly taking on. 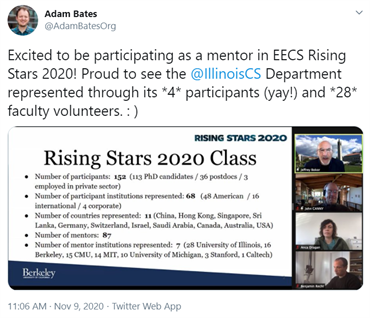 “I felt honored to learn I was going to be a participant for Rising Stars this year,” Datta said. “I looked forward to learning from a great group of participants and faculty mentors. Many of the participants were entering their final year of their own PhD programs, so I learned from people preparing for academic and industry positions.

“The faculty mentors were amazing, as well, and this turned out to be a great networking opportunity. It also offered a new perspective, outside of the circle I’ve formed here at Illinois CS.”