Thirteen episodes in, Illinois CS Professor Indranil Gupta finds pride in presenting a podcast designed to enlighten others of the surprising, uplifting, and extraordinary experiences of his colleagues and peers.

Indranil Gupta, Professor with Illinois CS, first moved to the United States from India to earn his PhD at Cornell University in 1998.

Over his years here, as a student and professor, Gupta remained interested in the unique perspectives forming and shaping the computing industry. This feeling permeated his own research group dedicated to distributed systems. Early on, he found the members to be predominately male. So, he sought out ways to form a more diverse group.

“Over time, my group reached a point where, right now, more than half of the PhD students are women,” Gupta said. “As the diversity of the group grew, I could see the quality of the interactions blossom.”

It’s with this perspective regarding diversity in mind that he started the Immigrant Computer Scientists podcast. Through 13 episodes, he has collected stories that present “an oral history project featuring prominent computer scientists.”

In Gupta’s words, the following interview explains what the podcast means to him and what he hopes to achieve through it.

Question: To start at the beginning, can you identify and explain a moment that served as inspiration for the Immigrant Computer Scientist Podcast?

Gupta: As my own research group became more and more diverse—now over 50% of my PhD students are women—I started reading literature on what brings women into CS (Computer Science) and STEM. A lot of literature exists on why kids move to science or STEM or CS. Yet, this literature is largely dominated by studies of American kids growing up in the US and its results include findings that center around certain concepts. There is a thought that most who go into CS grow up with computers or that most who go into CS have at least one parent already in computing. When I reflected on my own experiences or that of my friends, neither of these were true at all! So, I realized what was missing: histories of immigrants who grew up differently than Americans, yet became equally successful in the CS industry or academia. Whether men or women, immigrants grow up differently than Americans.

Another thing was gender disparity. When I spoke to my women colleagues who were immigrants, most of them said they had never thought of gender disparity in STEM or CS until they moved to the US. In many countries, engineering and medicine are the two big career areas. If you're great academically, you just go for it, whether you're male or female, and often your parents support you.

These moments made me think that there was a gap and a need. There have been other oral history projects done in the past on immigrants, and separately on scientists, but none have focused on immigrant computer scientists.

Question: How did you go through the process of identifying the computer scientists who you've interviewed thus far?

Gupta: I select very well-known people in the community – both in academia, industry, and the entrepreneurial world. They narrate their own stories. Half of my episodes have women guests. Rather than just a series of interviews, the podcast episodes are in segments, with each segment focused on a region or country. The first episode in any segment is what I consider a “lead episode,” featuring all the guests from that region. The remaining episodes in the segment are the individual interviews.

The podcast, essentially, comes in these segments. I find commonalities in stories, while I also want to be very careful to not draw conclusions from these experiences. After the first segment on Yugoslavia, which is Episodes 1-4, the next segment is on Brazil (Episodes 5-8), and then Middle East (Episodes 9-12). 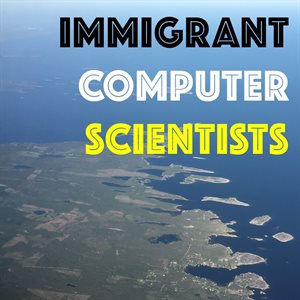 Question: Has there been a part thus far from these conversations that has impacted you in a surprising way?

Gupta: Every single conversation. And inside every single conversation, every five minutes. I become surprised because every one of the guests I have talked to has such a unique experience. Some of the guests I even know before the interview. So, they tell me, 'You know, Indy, my experience is not that unique.' Getting into the interview, I quickly find out that, no, it's extremely unique. Even the advice that they have for faculty, researchers, students, entrepreneurs; it has unique aspects. So, yes, I would say a lot of things surprise me about the wisdom that my guests have shown.

Even some facts are very surprising. Going back to what I was talking about with women in STEM. If you look at the majors in Iranian universities – at least at the university that my guest in Episode 9 and 10 went to – 70% of the students in software engineering were women. Then, in Egypt, where another guest went to school in the 1970s or '80s; among the computer science students going for their bachelor's, 40% are women. So different from the US!

So, there are constant surprises like this from every one of these episodes.

Question: What do you hope listeners take away from listening to the podcast?

Gupta:  I think every listener will take away different things from each episode. I kind of see the episode content consisting of two things. First, is the influence that history and various experiences has had on the guests and their path in CS. And the second is just pure advice.

I think that their advice is valid for pretty much anyone who has anything to do with computing, whether they're in academia as a student or a researcher, or a faculty or a postdoc. This is relevant to industry employees, too, like a researcher, a production designer or a software engineer. This also applies to the entrepreneur with their own company. The advice is relatable to everyone in computing.

The personal history part will mean something different to three groups of listeners. The first is non-immigrants, or people who grew up in the US. They, I think, just don't understand, and have had no chance to understand, what the immigrant experience is like.

The second category of listener is those who grew up in the same country or region. In some cases, there is a lot of strong feelings of nostalgia that come forward. For the people who discussed Yugoslavia and Brazil and Middle East, there was a lot of nostalgic discussion.

And then the third category of listener is just immigrants broadly. They will find experiences that make them go, ‘Yes, I’ve experienced that or this.’ Or they will find something unique despite a similar path. For example, if you’ve never lived through a war, you will still identify with the experiences of someone who has! This is all a part of understanding each other as a community and understanding what drives us.

Question: In regards to the success of the podcast, which you've recently tweeted about in terms of finding it among the top 20% of listeners, what has that meant to you?

Gupta: While it’s nice to see that it’s being listened to, the thing that holds the most value to me is the reaction listeners have when they listen to an episode. I’ve heard about this through comments on social media. Some people have sent me emails. This just shows me that there are people that a particular episode has touched, which, for me, is more important than any listener numbers. When they take the time to write me, that means a lot.

Another thing that’s also meant a lot to me is that the guests that I’ve had on respond positively to it. Most have told me that they enjoyed the interview and what the episode turned into. It’s really important that those who tell their stories feel this is a safe space to feel comfortable. I feel like when that is achieved, then the guests will open up their hearts to the interview so that others may learn.